The Beginning of Fall

One of the greatest things about living in Southern California is the weather - summed up by sunny warm weather year round. Yet with daily doses of sunshine, it is hard to imagine that Fall is already here with Winter coming up fast. 90 degree weather hardly makes me want to turn on my oven for some Fall baking and I feel rather silly ordering a hot pumpkin spice latte when it is sweltering outside. So you can imagine how excited I was when the temperature dropped from 90s this weekend down to 50s yesterday. Hallelujah it's finally starting to feel like Autumn - the season to pull out the boots and sweaters, and start thinking about the holidays coming up. After 6 years of snowy winters on the east coast, I can hardly call christmas lights strung up around palm trees around here "festive." Yet at the end of the day, even though I am missing the seasons, I am thankful for not having to wake up an extra half hour earlier to defrost my car or shovel my driveway.

What better way to celebrate the beginning of Fall than to start some Fall baking. My friend recently asked me to make a candied yam cookie that she had tried from a bakery in New York. Having never tried the cookie before, I could only go off of the description she gave me: soft, cake-like, filled with spice. So after some research, I came up with my own rendition of the candied yam cookie: Sweet Potato Spice Muffin Tops. I like to call them muffin tops rather than cookies since the texture is much more cake or muffin like. And in all honesty, it was kind of an excuse to try out my mini blow torch - so fun! 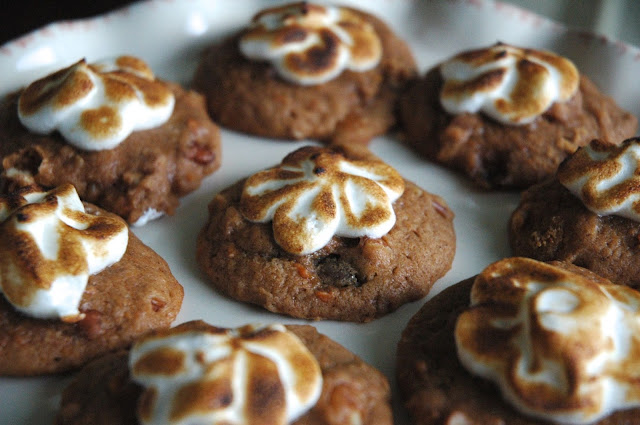 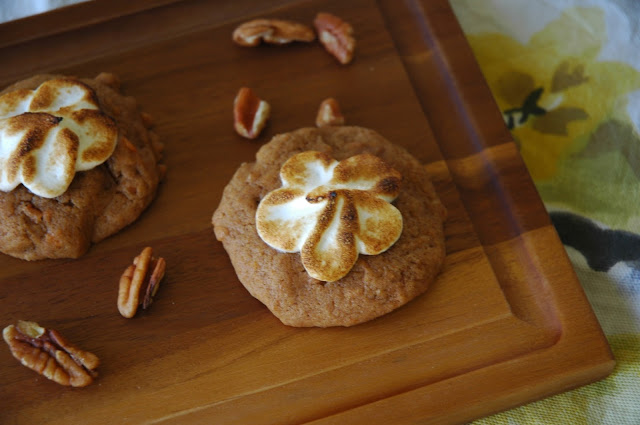 Instructions:
1. Boil 1 medium sized sweet potato (about 20-30 minutes). Once you can pass a fork through without resistance, remove sweet potato. Peel skin and discard. Mash the sweet potato and let sit to cool.
2. Preheat oven to 375 F
3. With an electric mixer, cream butter and both sugars until light and fluffy
4. Add egg and stir just until mixed
5. Add vanilla and mashed sweet potato and stir until combined
6. In a separate bowl, sift together flour and all dry ingredients except pecans
7. Add half of dry mixture to sweet potato mixture and mix until combined. Add remaining half of dry mixture and stir throughly
8. Add chopped pecans and stir just until combined
9. Using a 1 inch ice cream scooper, scoop batter onto a cookie sheet leaving 2 inches between scoops to allow for spreading.
10. Bake for 10-12 minutes until lightly golden.
11. Remove from oven and let cool on baking sheet for 5 minutes then transfer to a baking rack to cool completely.

For frosting:
12. Stir together sugar, salt, egg white, cream of tartar, and cold water in a steel mixing bowl over a pot of simmering water. Using an electric mixer, mix contents of bowl on high until stiff peaks form and temperature of mixture is >150 degrees C (about 10 minutes)
13. Remove bowl from heat and whip for an additional minute to allow mixture to cool down slightly.
14. Add vanilla and marshmallow creme and continue to whip for an additional 3-5 minutes until fluffy and combined. 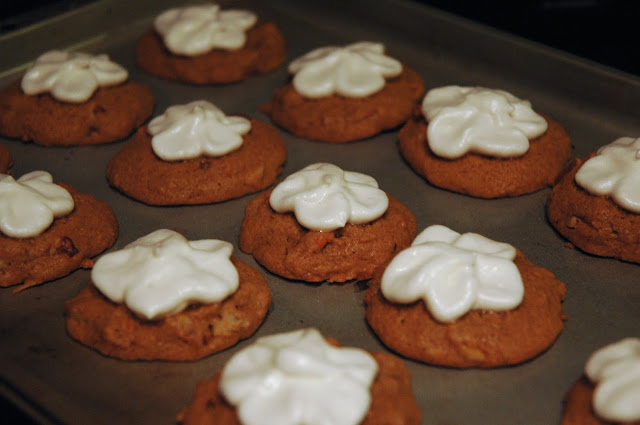 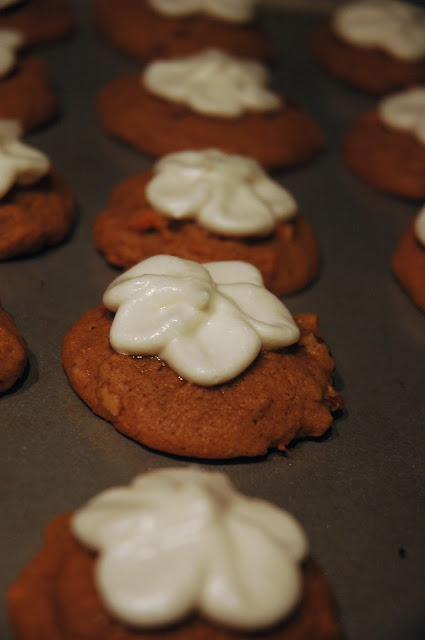 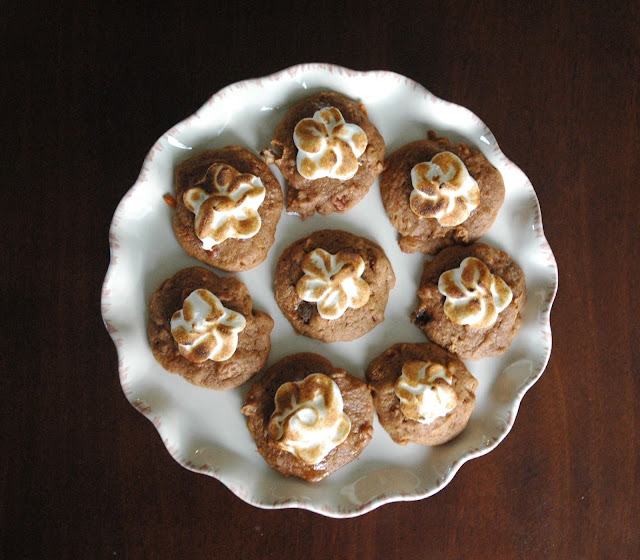 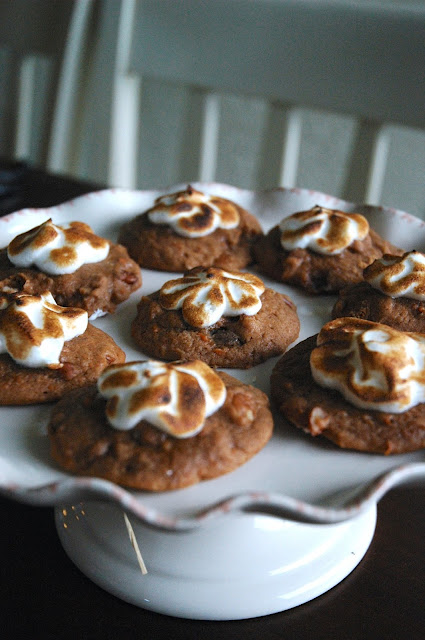 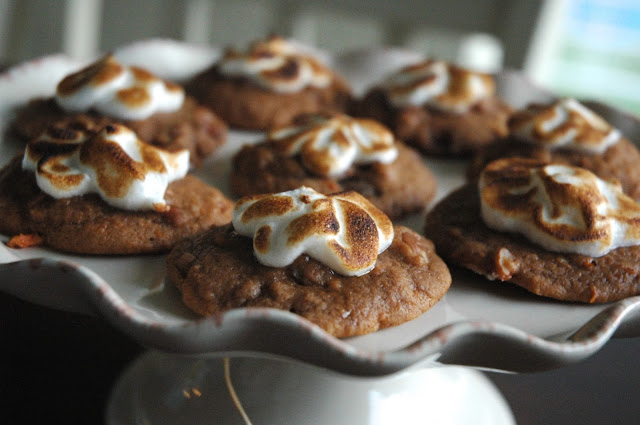 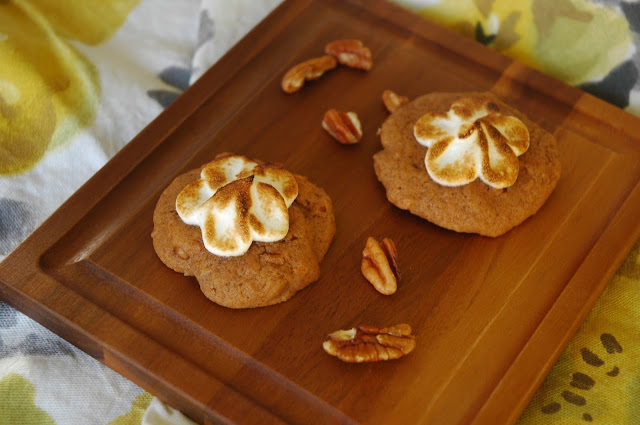 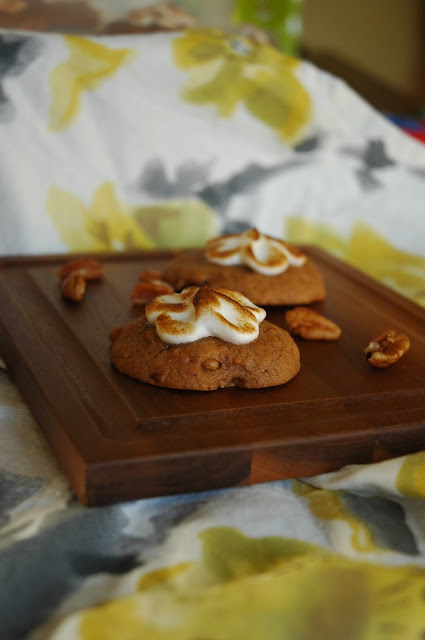 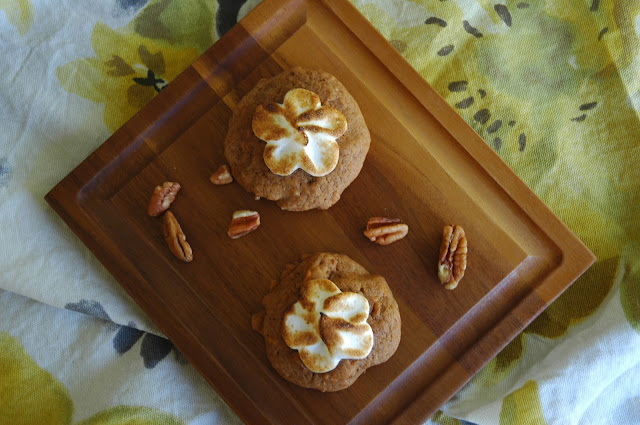 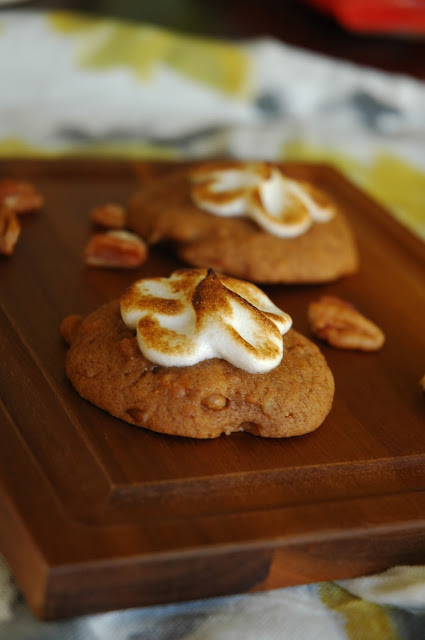 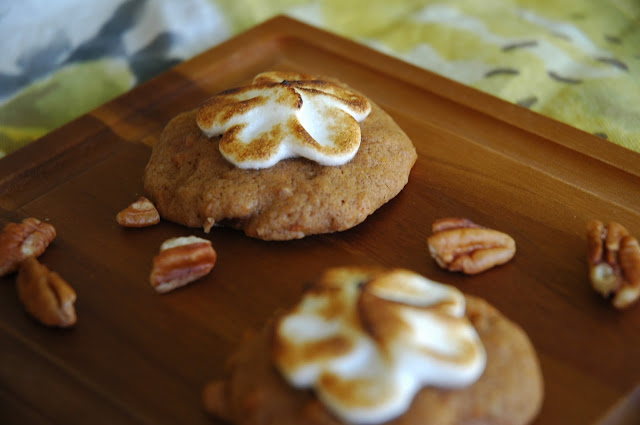 Recipes adapted from original recipes at FoodNetwork.com and All Recipes.

*Note, this recipe would probably taste just as good with pumpkin instead of sweet potato.
Posted by Vivian at 10:20 PM