Getting to Know Guam: Letting our Tastebuds Lead the Way

While it is considered a US territory, Guam's history dates back centuries before Magellan ever landed on the island. It's culinary scene is both native Chamorro food and a mix of Asian cuisines (given it's proximity to Southeast Asia) in addition to your classic "American food," aka McDonalds, Papa John's and other fast food joints along those lines. Produce in Guam is unfortunately horrendously expensive as most of it is imported. Agriculture is not a big part of island life. The first day we arrived in Guam, we headed for the supermarket to buy groceries for the week and boy, was the sticker shock just that--shocking. Used to cheap produce from Southern California, we could not believe our eyes when we saw a bag of salad for $6 that we were used to paying $3 for at home. However, on the flip side, meat is cheap and easily accessible so the local diet consists mainly of beef and pork with red rice (white rice dyed red with achote seeds along with some seasonings). 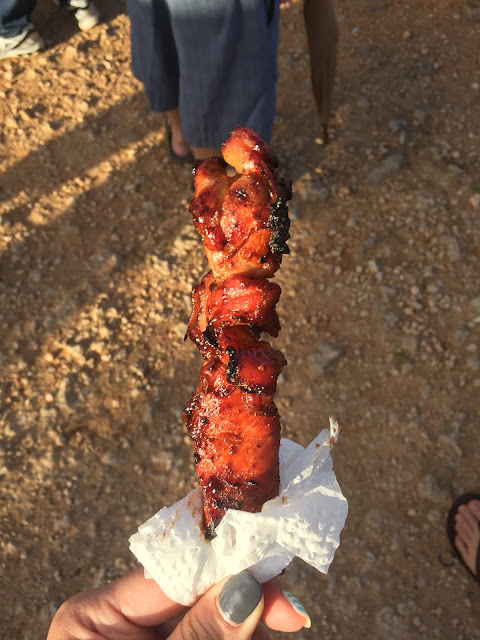 
But I have to admit, given their love of meat, the Chamorro know how to barbecue!  Literally every weekend the parks are filled with locals barbecuing marinated beef, pork, and chicken. At every night market, farmer's market, and festival, they have stands of endless bbq skewers. It was seriously so good we probably ate this twice a week. One of the best places to get it was the Wednesday night Chamorro Village night market.

Chamorro Village is a cultural night market that goes on every Wednesday in Hagatna. It is both a local and tourist attraction, selling anything from Chamorro food to delicious smoothies to handmade gifts from the island. They even had a dance floor where the locals come to line dance every week. We missed the cultural dance show unfortunately, but were able to watch some line dancing. 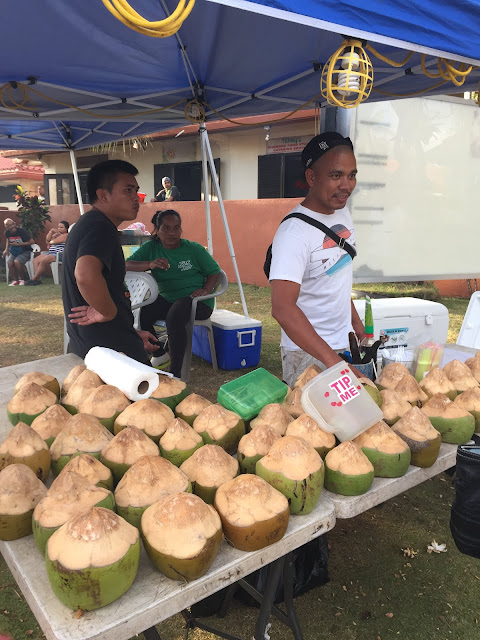 Never a shortage of coconuts 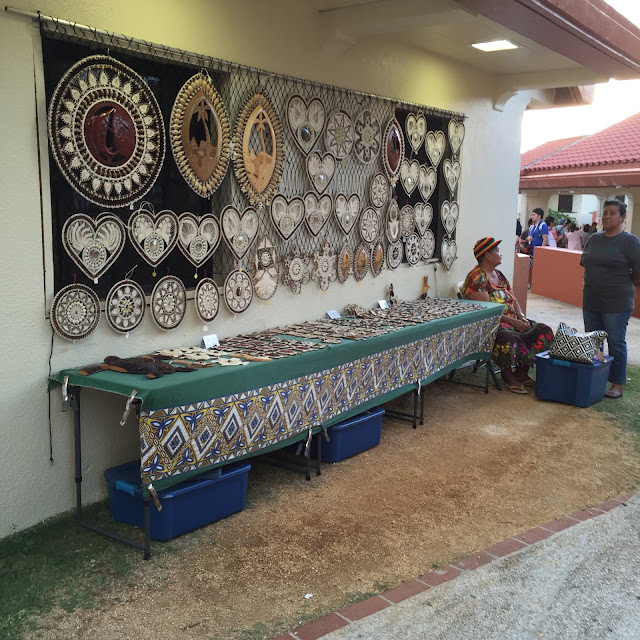 A local weaving these masterpieces using leaves and shells

One of the restaurants we went to was a fusion restaurant called "Meskla" that served both classic Chamorro food and some interesting fusion dishes. We ordered the Chamorro platter which included half of a fried parrot fish (they get their name for their parrot beak shaped lips), red rice, coconut curry dipping sauce, dried smoked beef, salad, tortillas, and clam kelaguen. 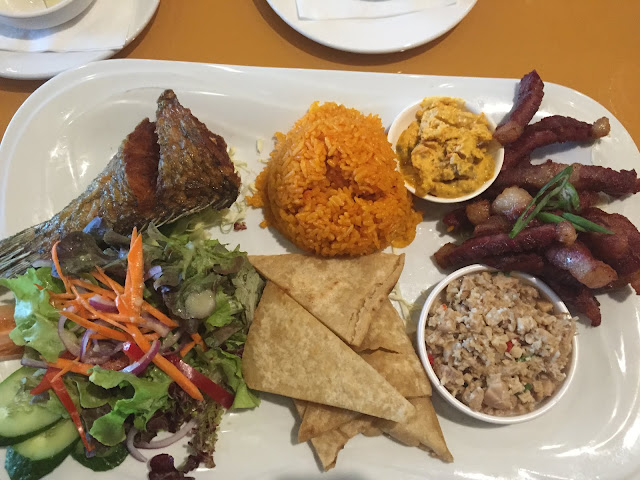 Kelaguen is a Chamorro dish that is very similar to ceviche. It uses acidic lemon and lime juices to cook different types of meats. Chicken kelaguen is very popular; they do cook the chicken before hand -- I had to make sure since I was rather wary of eating chicken cooked only in lemon juice. The smoked dried beef was interesting, almost jerky like in texture. I forget the name of the coconut dipping sauce but it was amazing, both creamy and spicy. I could probably eat that with a side of rice by itself.
The other dish we ordered was a Salmon Wellington. This was definitely one of their most popular fusion dishes. The pastry crust was flaky with tons of layers and the salmon inside was perfectly cooked. This dish was very impressive to me, not just the flavors, but the science and technique: getting the pastry to cook through to create all those flaky layers, but just enough that you avoid overcooking the fish. I would love to be able to recreate this at home 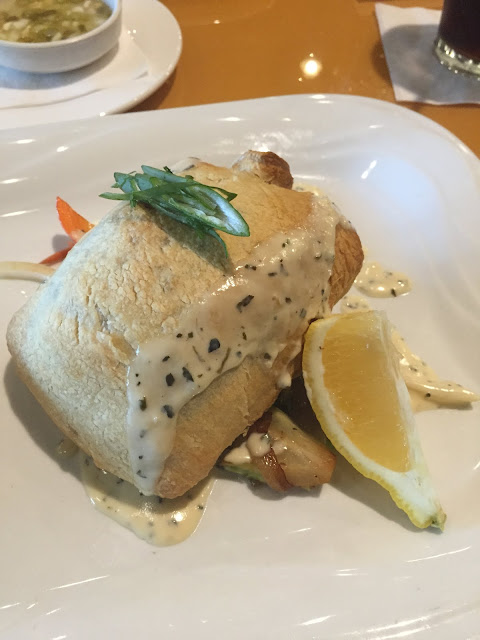 Our next stop was Pika Cafe, a fusion lunch spot. Nhan had the tinaktak burger and I had the tinaktak salmon sandwich. Tinaktak is a dish usually served by itself, consisting of green beans sautéed in coconut milk and oftentimes ground beef. While the sandwiches were delicious, they were surprisingly pricey for a lunch cafe meal (about $15 a piece without any sides). We think they cater mainly towards tourists as I can't imagine that many people would pay that much for a sandwich. 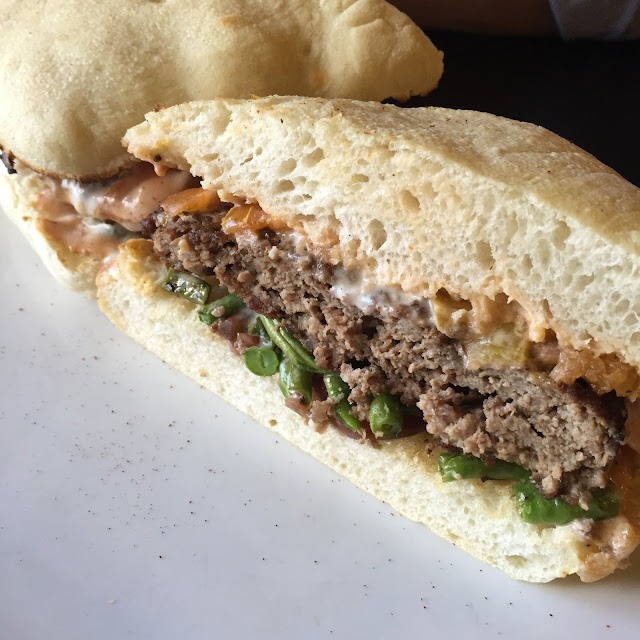 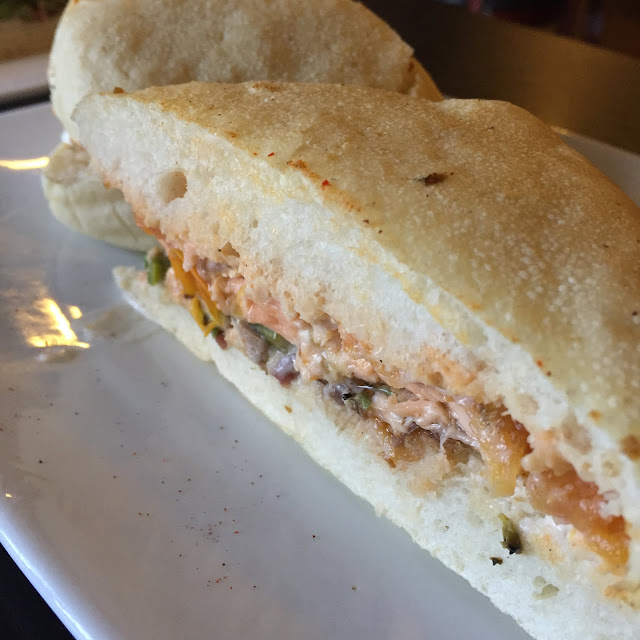 Given how much we enjoyed "Meskla" we decided to try out their sister restaurant "Meskla Dos," a more casual burger joint near downtown Tumon. We noticed that on the island there are a lot more seafood options than there normally would be back on the mainland. At pretty much every burger place, there was an option for a fish burger or in my case a spicy shrimp patty burger. It kind of reminded me of a fried shrimp dimsum style meatball turned burger, which i thoroughly enjoyed, along with the crispy panko breaded onion rings (the best kind of breading in my opinion) and sweet potato fries. Now these burgers were definitely worth their money and were actually a lot cheaper compared to Pika. 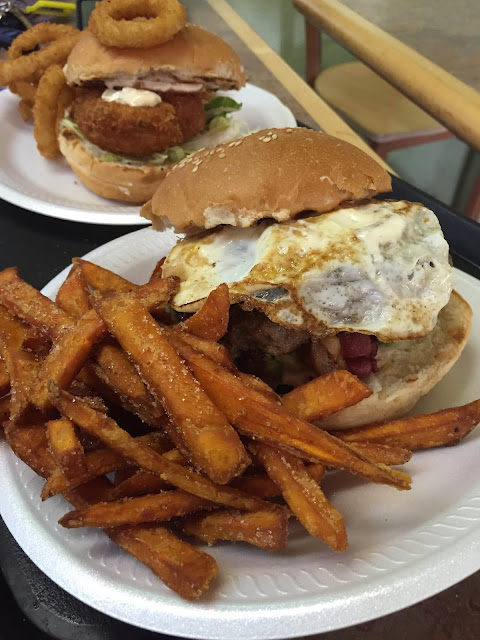 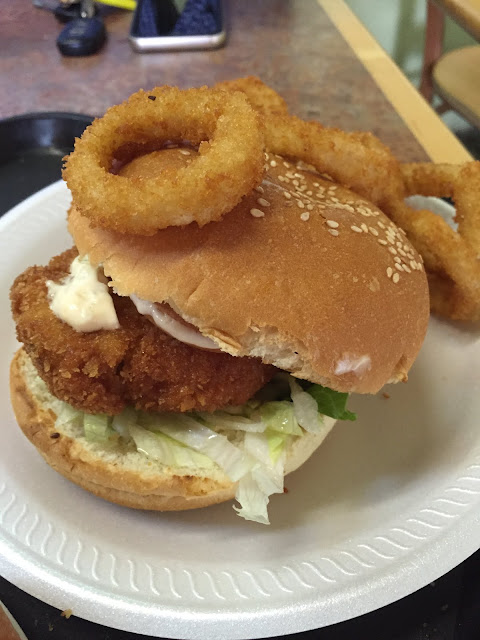 We were super lucky that the month we were there (March) it was Chamorro heritage month so there were a lot of festivities going on. The SDA Guam clinic hosted a Chamorro lunch that let us try all the traditional Chamorro foods vegetarian style. While everything was delicious, the kelaguen, tinaktak and coconut milk creamed spinach were my favorites. I couldn't fit it all on my plate! 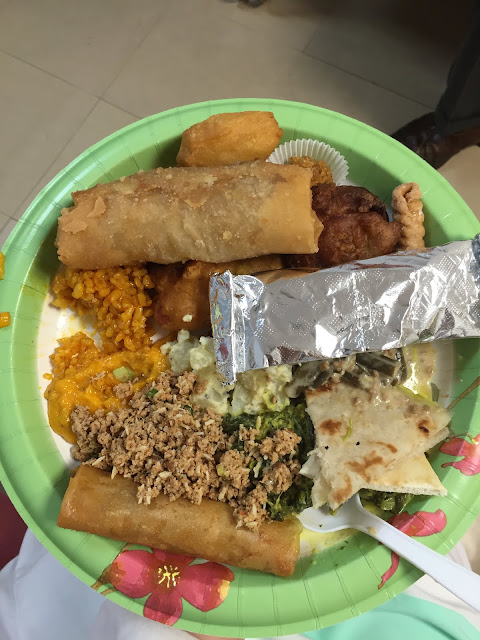 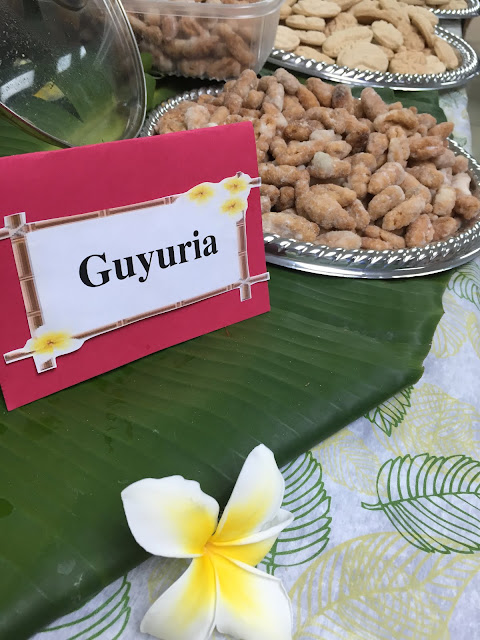 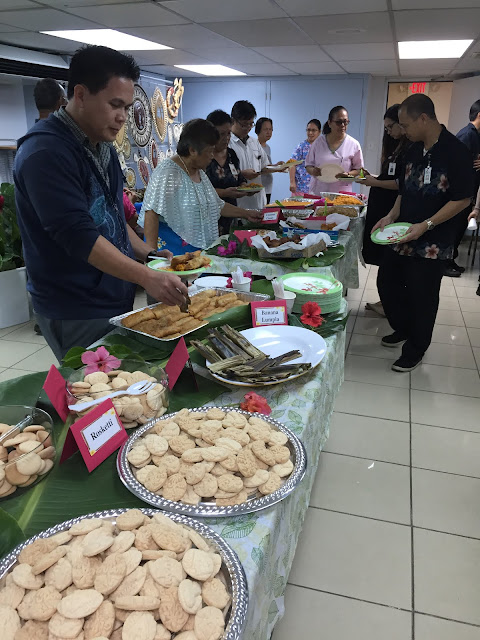 While we spent the weekends exploring the island, most of our days were spent at work and the evenings at Infusion Coffee and Tea in Tamuning studying for boards and working on research from home. I think we tried almost all the drinks on the menu. My favorites were the taro earl grey tea and the calamansi cooler (calamansi is a local fruit very similar to a lemon). They also served crepes and amazing taro cupcakes. 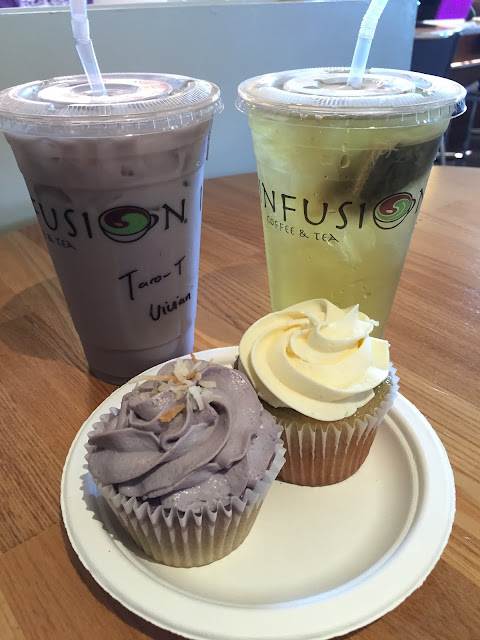 And on the topic of taro, we also got to try taro cheesecake at "Proa", a popular upscale but touristy restaurant downtown. 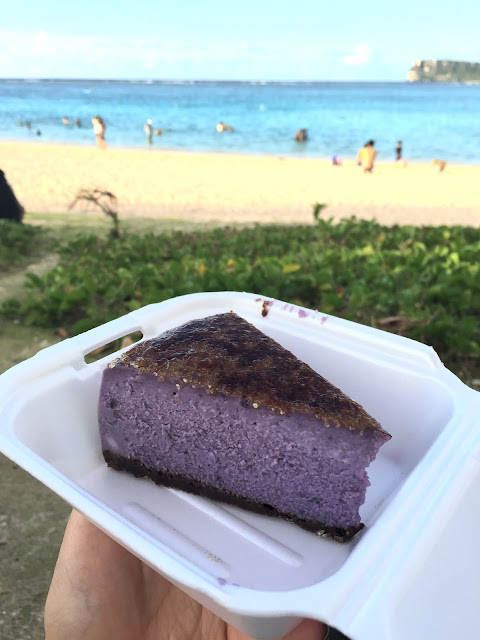 One of my favorite places to go for breakfast on the island was the Sunday morning farmer's market in Dededo. It starts as early as 5am, but lets be honest, we never made it out that early. We did get there before 7 though, because that's around the time the tour buses dropped off all the tourists and the market got insanely crowded. The locals all know, so they get there super early. It is a combination of a flea market and a farmer's market, selling anything from cookware, clothes, and blankets, to local produce, fresh fish, and interesting foods.
Given the price of food on the island, we tried to do a lot of our own cooking while we were there and succeeded for the first two weeks. When we saw the fresh fish at the farmer's market, we were inspired to try to cook one. My experience with cooking fish has been limited to baking salmon or tilapia and I have never really ventured outside of that. So we figured this time, why not be adventurous and try salt baking, and sure, why not try milk fish too. We only realized after we had prepared everything that our oven didn't work. But that did not stop us. We wrapped our salt caked fish in foil and brought it out to one of the grills at Ypao beach. Granted, what should have cooked in 30 minutes took us 1 hour over hot coals, but we got it done! The fish came out so incredibly moist and the flavors from the lemon, garlic, and ginger really seeped into the fish. The only bad thing was how many tiny bones this little guy had. Next time we will probably try salmon. Recipe below is for an oven bake. 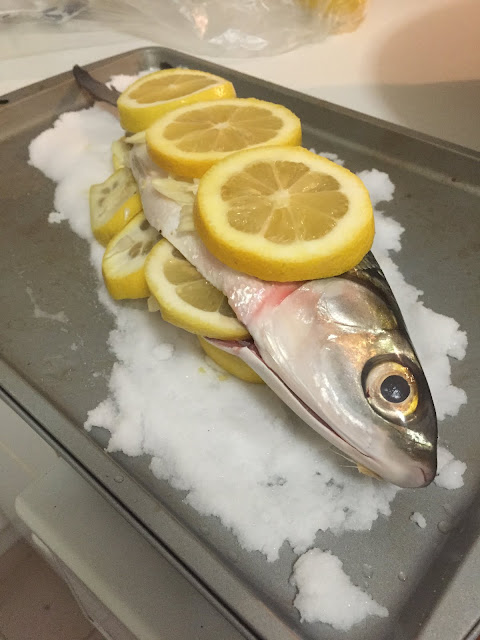 We also bought some fresh shrimp from the market and grilled that with olive oil, lemon, garlic and sea salt. It was a seafood feast for two!

Some other stuff we cooked:

Towards the end of our trip, we started craving Italian food, a change from the BBQ, Chamorro food, and Asian style dishes we had been having. We stopped by Crust Pizzaria Napoletana, Guam's first pizzaria that just opened up in December of last year. The highlight? They make fresh pasta, and if you don't already know, I would do anything for fresh pappardelle. We had their pappardelle pasta with a mushroom sausage ragout, and their brick oven pear and blue cheese pizza, both on par with Italian food you would find back home. 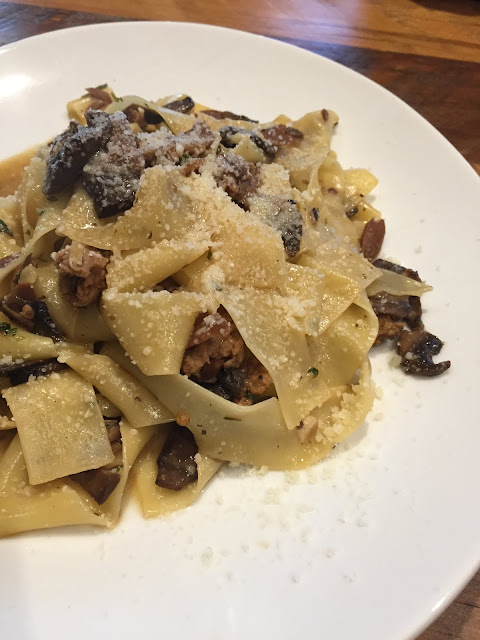 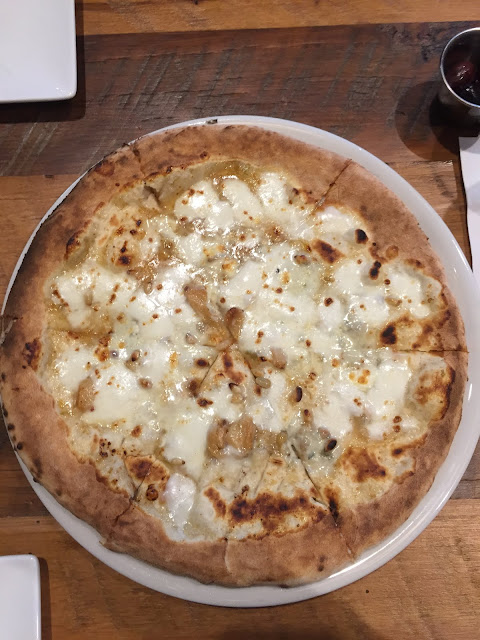 We hope you enjoyed reading about our food escapades as much as we enjoyed eating these delicious meals. A culture is much defined by its food and we are glad that we were able to get a glimpse of Guam's culture bite by bite.

Check out our adventures on the island. We had to work off these calories somehow! :D

Adventures in Guam
Posted by Vivian at 6:18 AM