The Boy and the Baker Take on Spain


It's been just about two months since the wedding and the honeymoon post is long overdue. This post will be the first of a series, detailing our travels through the beautiful country of SPAIN! We spent nine glorious days basking in the Spanish sunlight, immersing ourselves in the rich culture of the world around us. For a country so impressive in music, architecture, and dance, you would not expect any less of its food. To say the least, we were not disappointed.

The first three days of our trip were spent in beautiful Barcelona, a city that has perfected the fusion between old and new, blending medieval architecture with modern shops and restaurants, leaving a surprise in every corner and down every street as you walk through the narrow alleys of the Gothic Quarter. Strolling along the cobblestone roads, every turn led to new sights, smells, and tastes, saturating the senses and painting a colorful picture of life and excitement.


As soon as we landed at the Barcelona airport, after a 10 hr flight from Miami, all we could think about was PAELLA, PAELLA, PAELLA. Our hotel sat right along Las Ramblas, the local and tourist ridden street running through central Barcelona. The street is alive with cart vendors, restaurants, and people, never slowing down until the early morning hours. Given its popularity, Las Ramblas hosts many "tourist trap" restaurants. Tired and hangry, we stopped by the first restaurant we saw on the street that offered a paella and 3 tapas for just 12 euros. Travelers beware! Don't fall for the same trap we did. The food at many of these restaurants is expensive and mediocre. You can find better food for cheaper prices just by walking a few blocks or doing your research. Having learned our lesson, we researched most of the subsequent restaurants we went to.

I recently came across a term that perfectly fits the nature of our travels: "food tourism. " We base our traveling on the restaurants we want to try. Using that as our final destination, we tour the local popular spots on the way to and around it, and at the end of the day we have usually hit all the main attractions. More importantly, our bellies and tastebuds are happy. Using walking as our main method of transport (with the occasional subway or taxi), we are able to experience the streets, the people, and the buildings, all the while burning off some calories in prep of our next meal.


La Plata, Barcelona
After the failed lunch escapade along Las Ramblas, our first venture into "real" Spanish cuisine was to La Plata, a cozy authentic bar founded in 1945. A favorite amongst both locals and tourists alike, this bar only has 4 things on their menu. You know the food has got to be good when a bar has been serving the same 4 items for the last 70 years. The bar impressed us with their simplicity, from the decor, to the size of the place itself (only big enough for 6 tables plus a few seats at the bar), to the simple yet delicious ingredients in their dishes: 1) Fried sardines - a staple in Barcelona bars; 2) toasted bread with crushed tomato spread, and topped with Catalonian sausage; 3) same bread and tomato combination topped with marinated anchovy; 4) onion, tomato, and olive salad dressed with olive oil and vinegar. Their classic dishes are accompanied by a choice of house red wine, house white wine, or vermouth. A 2 oz thimble of wine costs just over 1 euro (about $1.25 USD) whereas each tapa was around 2 euros or less. Amazing food for amazing prices - now THAT is the real Spain we had been waiting to experience.

Sensi Tapas, Barcelona
So we continued onward! We had passed by this restaurant prior to going to La Plata and determined we had to come back. It was definitely worth the walk. Sensi Tapas is more of a "New Spanish" vs Spanish-Asian fusion style restaurant, taking a new spin on old classic dishes. One of my favorite items was their patatas bravas, fried cubes of potato with a spicy sauce. We tried this dish at other restaurants during our trip but Sensi's version was definitely the one that stood out. The potatoes were cooked to perfection, chewy on the inside with a crispy exterior, and covered with a creamy spicy aioli. Their duck timbale consisted of the same mouthwatering potatoes mixed with shredded duck and covered in parmesan cheese and a balsamic drizzle. As for the foie gras risotto, I have but one word to describe it - Umami. Need I say more? As foie gras has been banned in California, we were so excited to see this on the menu at many of the restaurants in Spain and definitely ate our fare share of it. Lastly, their baby eel and squid salad was my venture item for the night, but to be honest, it rather creeped me out a little, both in presentation and taste. I think I'll go back to my teriyaki eel with sushi, thanks.

Xaloc, Barcelona
Iberian ham is a specialty food in Spain. Every street you turn down and every restaurant you walk into, will have pork legs hanging from the ceiling. This is their Iberian ham, or jamon Iberico as they call it. What is so special about this ham? I wondered the same thing. Iberian ham is made from a special breed of black Iberian pigs, bred in Western/Southwestern Spain. The pigs are not caged, but instead left to roam and scavage for its food. Jamon Iberico de bellota is a subspecialty that is even more coveted than Jamon Iberico, the difference being that the pigs eat solely acorns that fall from a tree only grown in a certain region of Spain. It is believed that the acorns provide a "healthy" and tastier fat that gets incorporated into the muscle, creating beautiful marbling in each cut and savory satisfaction with each bite. By allowing the pigs to roam rather than be caged, it improves the texture of the meat as it decreases release of certain enzymes when the animal is stressed or scared. The dish pictured above shows thinly sliced jamon Iberico over fried potatoes and eggs.

One of my favorite memories of our 4 years in Philadelphia is Reading Terminal Market, an indoor market in central Philadelphia, filled with different meat and cheese shops, produce vendors, and food stalls. As soon as we stepped foot in La Boqueria in Barcelona, we were immediately whisked back to those days at Reading Terminal where we would go to pick out our weekly fruits and vegetables and sample a myriad of cheeses freshly cut from the wheel. La Boqueria is an outdoor market even bigger than Reading Terminal and similarly stocked with vendor stalls featuring produce, cheese, jamon, candy, and gastrobars. The options are endless and for an indecisive person it could take hours to decide which cheese shop was better than the next, or which bar had the best razor clams. It was with bittersweet feeling that we left this beautiful market that had invoked such fond memories of our time in Philly.

Architecture and the influence of Gaudi 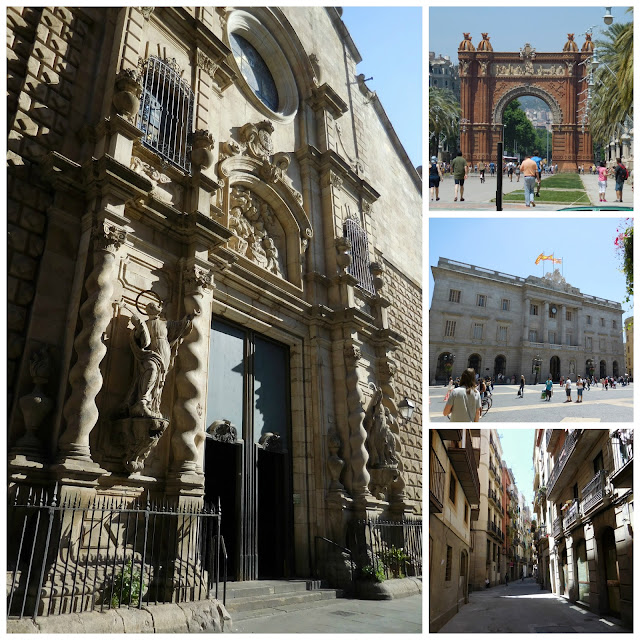 During our trek to each of our food destinations, we came upon many buildings that simply left us in awe. From the gray stone medieval churches to the pillar-supported cathedrals, the narrow streets and alleys to the open and inviting plazas, and finally to the buildings designed by Gaudi himself, nobody could argue about the diversity of Barcelona's architecture in both style and age. One of Gaudi's most famous works is La Sagrada Familia, a basilica which has been in construction since 1882, and continues to be a work in progress, long after the death of its original designer. The facades and details that make up this basilica make it one of the most impressive and unforgettable buildings in Barcelona.

Ok fine, we did not actually have a destination wedding. The day before we left for the honeymoon, we thought to ourselves: wouldn't it be cool if we brought along our wedding gear for a photoshoot? We had each only packed a carry-on and had free checked bags, so why not? Our last day in Barcelona, we woke up at 5AM, did hair and make up, and set out on the streets before 8AM. We wanted to get the most beautiful shots with natural lighting and at a time when hopefully not too many tourists were out. Since nightlife in Barcelona doesn't end until late in the night and early morning, that meant everybody was still sleeping in at 8AM. The streets were ours to take! With a tripod and a Nikon Coolpix in hand, we hit the alleyways of the gothic quarter, the Parc de la Ciutadella, and Labyrinth Park. 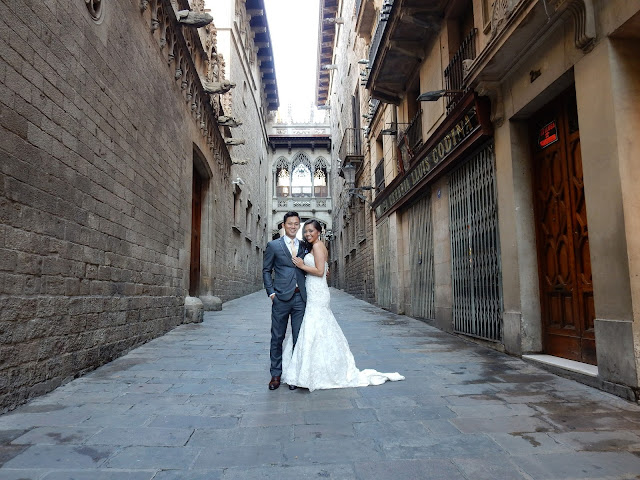 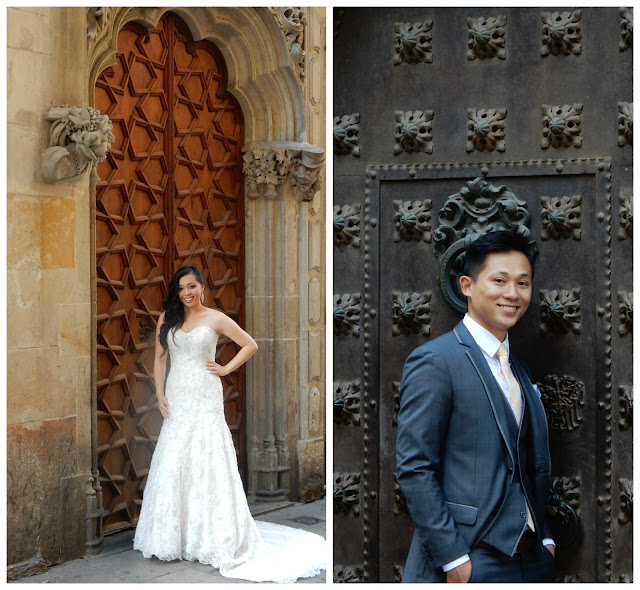 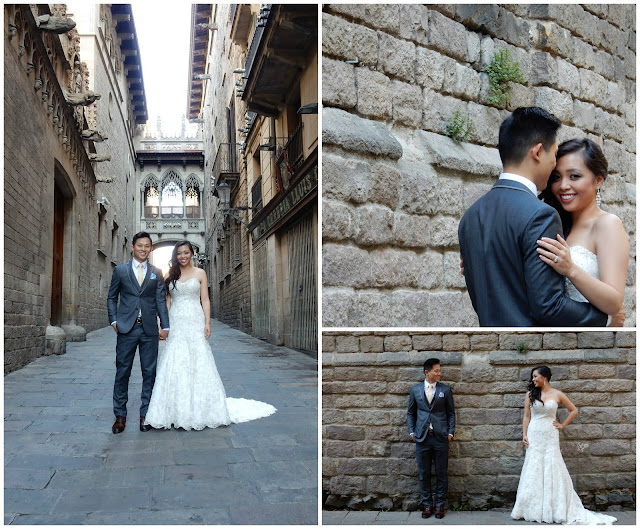 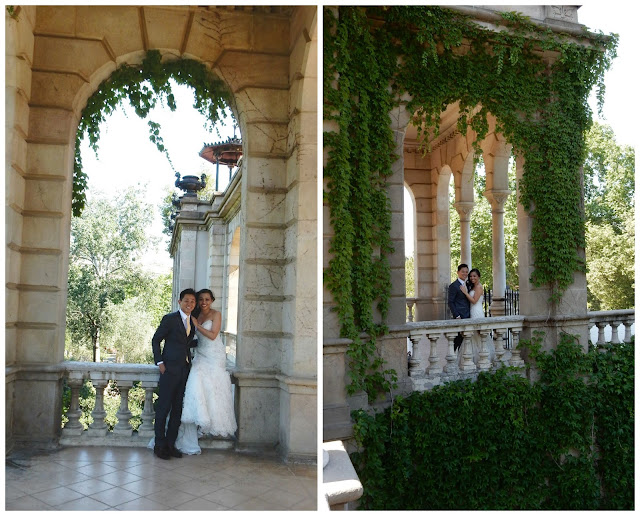 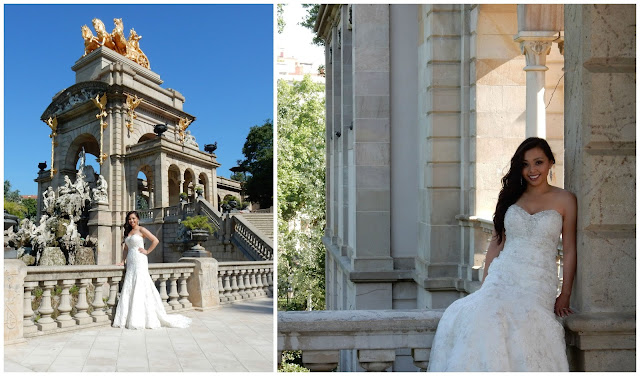 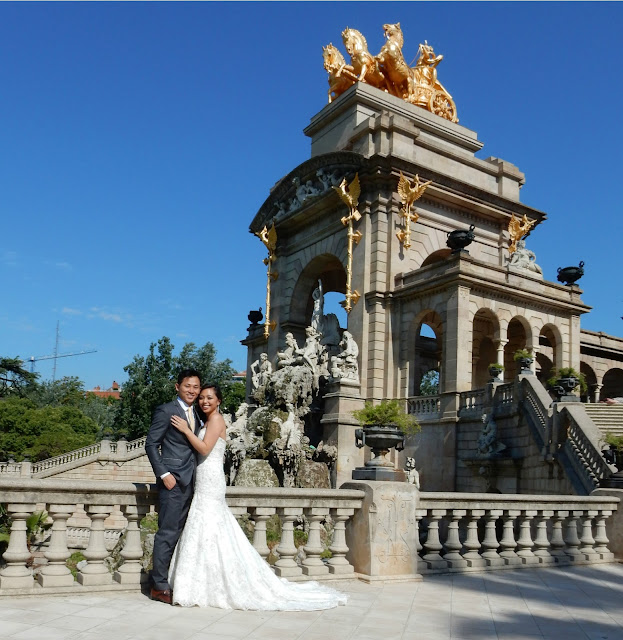 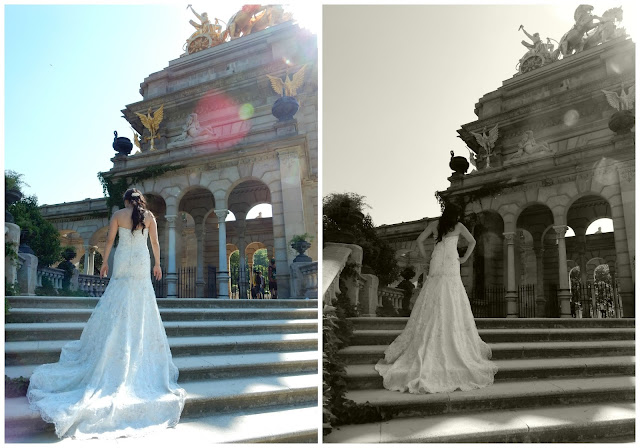 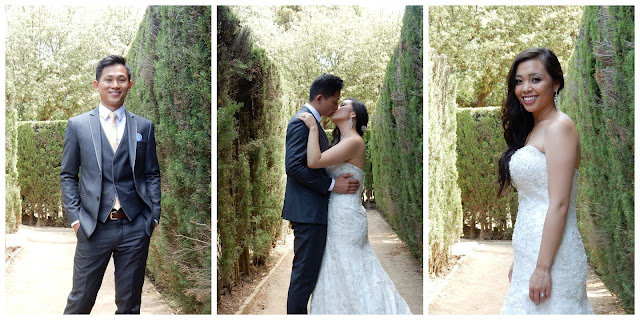 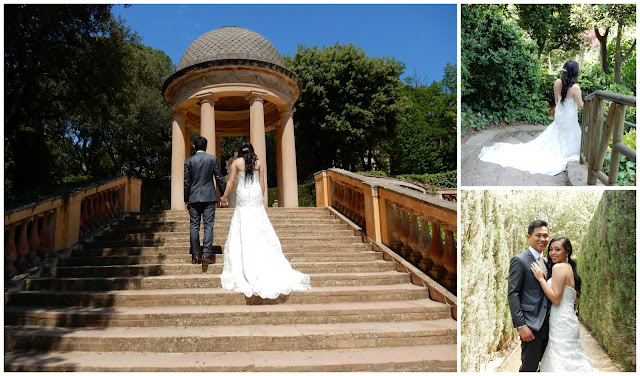 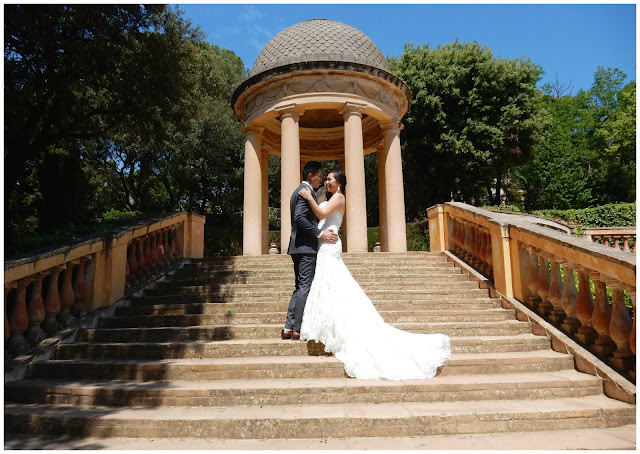